May 20, 2016: “Produkty Pitania” Company group won 6 gold medals and the Cup of the German Butchers' Association for high quality products at the international trade fair IFFA-2016 in Frankfurt am Main!

Produkty Pitania Kombinat became the winner of the International competition of meat products within the world’s leading trade fair IFFA-2016, which took place in Frankfurt am Main, Germany from 7 to 12 May 2016. 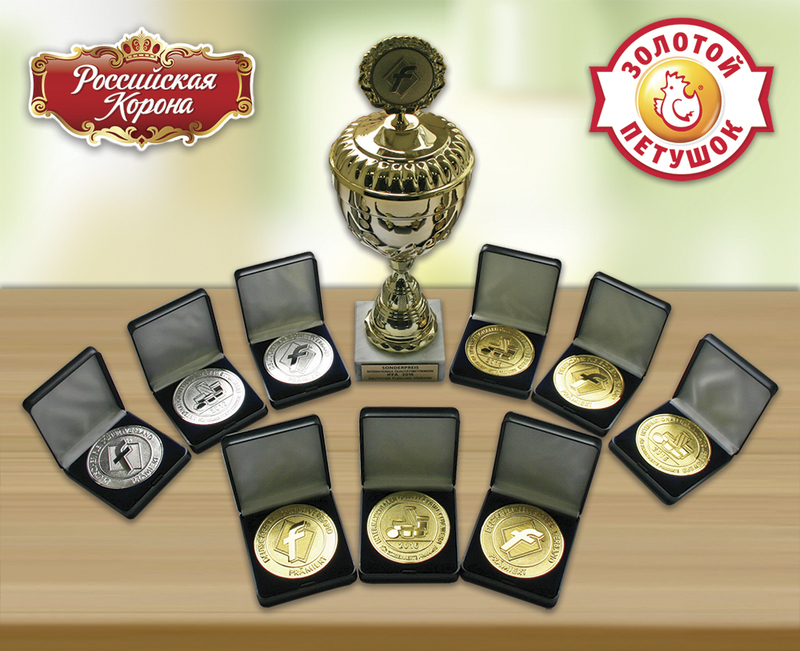 Gold medals were awarded to the following products:

IFFA 2016 is one of the largest and important events in the meat-processing industry, which covers the entire production chain, from slaughtering and dismembering, via processing, to packaging and sales.

Awards ООО “Produkty Pitania Kombinat” has won in Germany, once again prove the highest quality of our products! 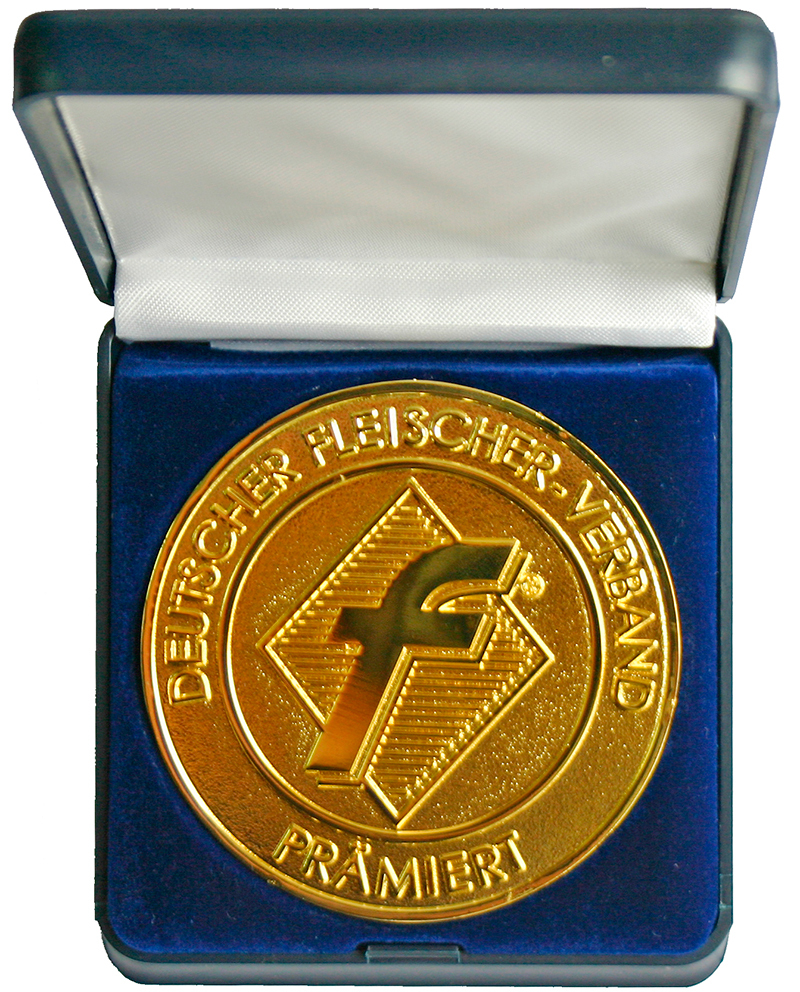 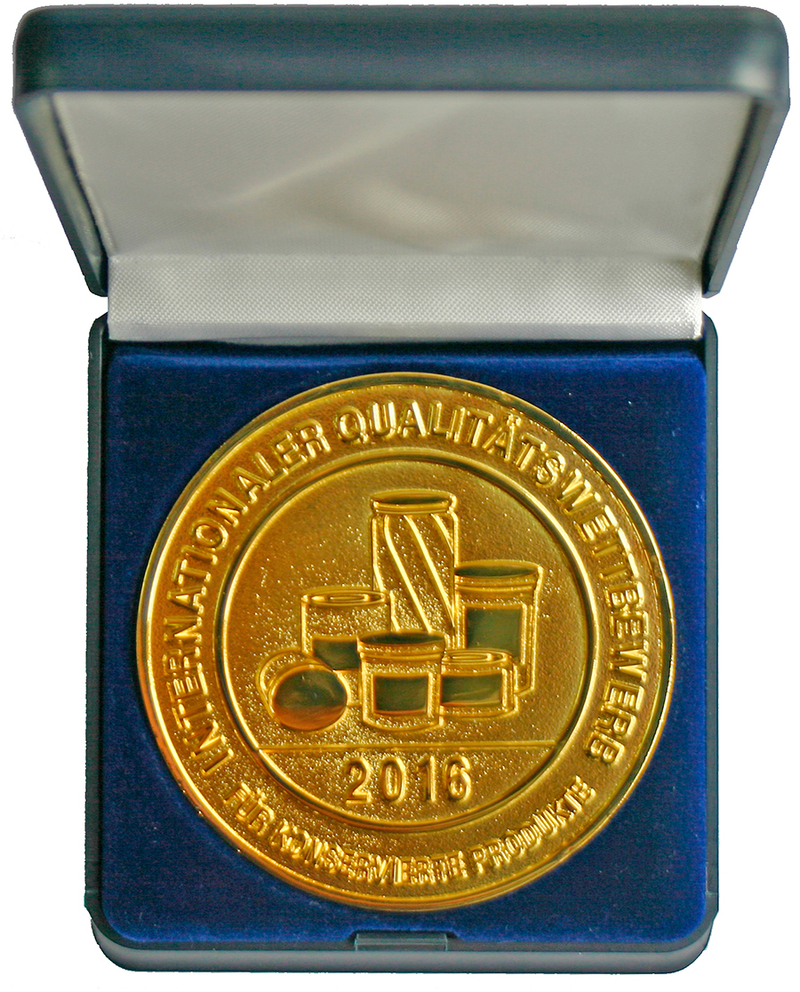 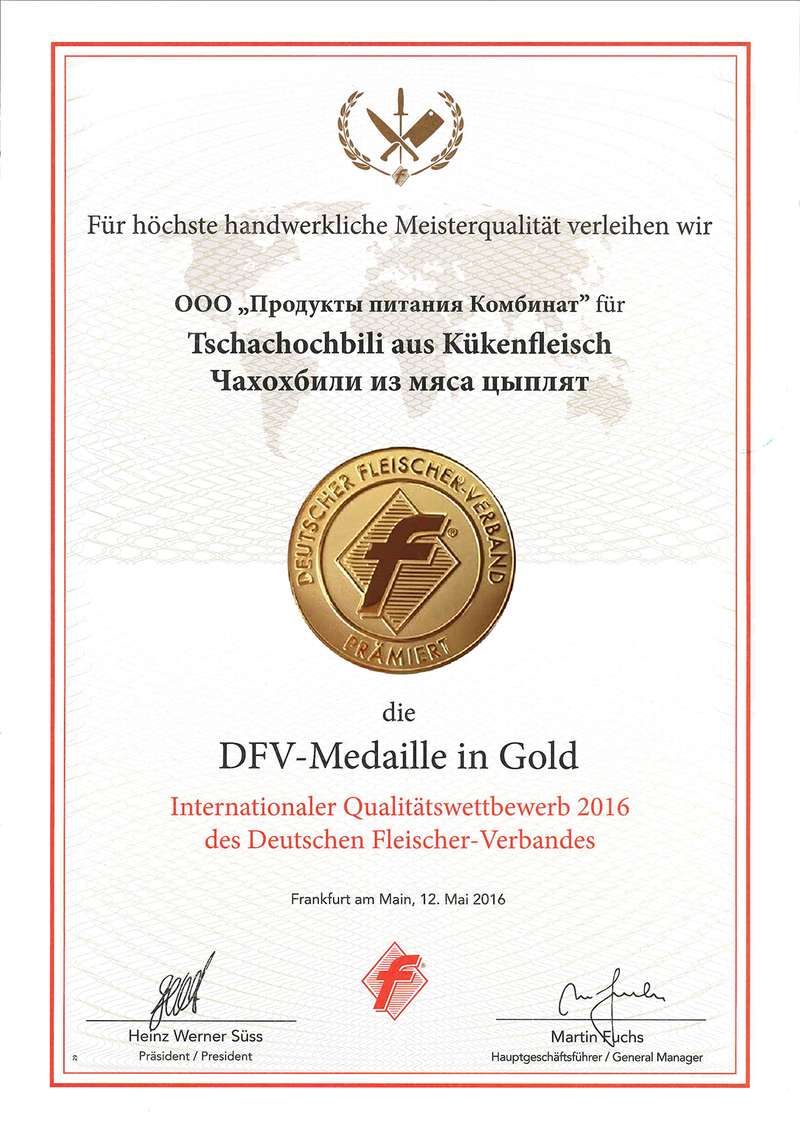 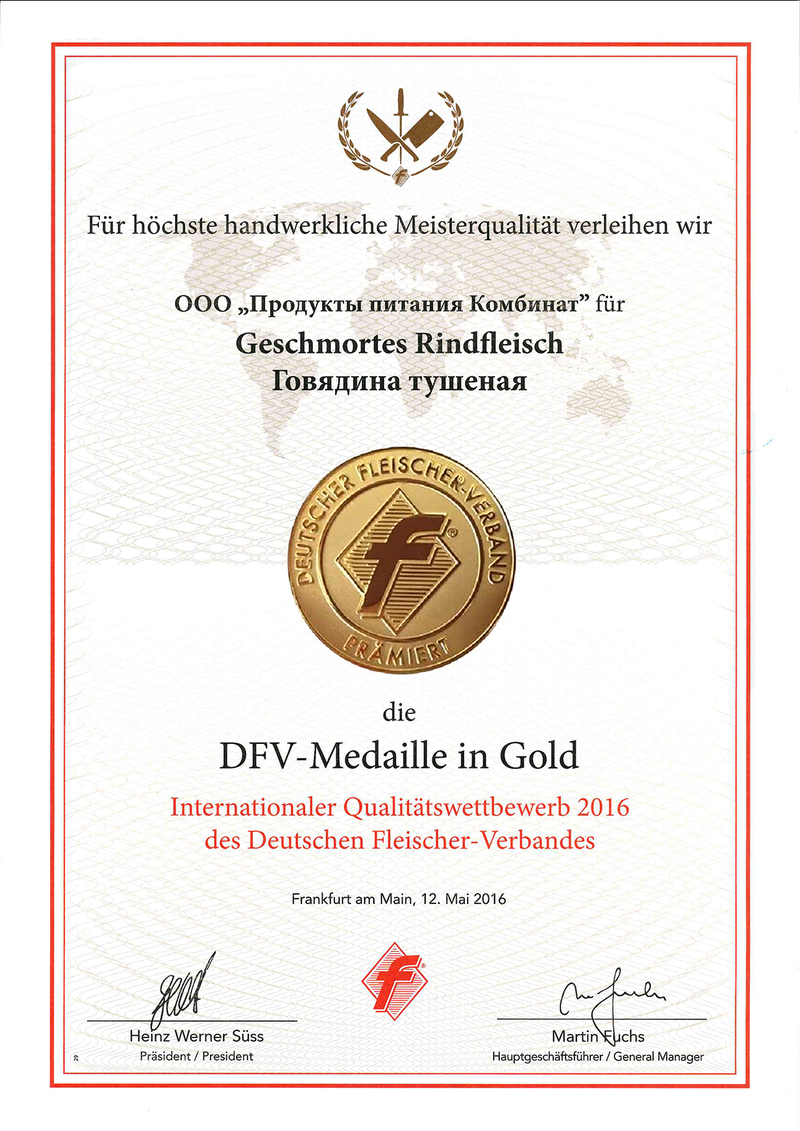 Within the largest Russian exhibition of food products “Prodexpo-2016” international competition “the Best Product – 2016” was held. The winners were selected by an expert commission based on the results of the tasting contest among dozens best manufacturers.

According to the results of the international competition “the Best Product – 2016 products presented by Produkty Pitania Company Group received the following awards: 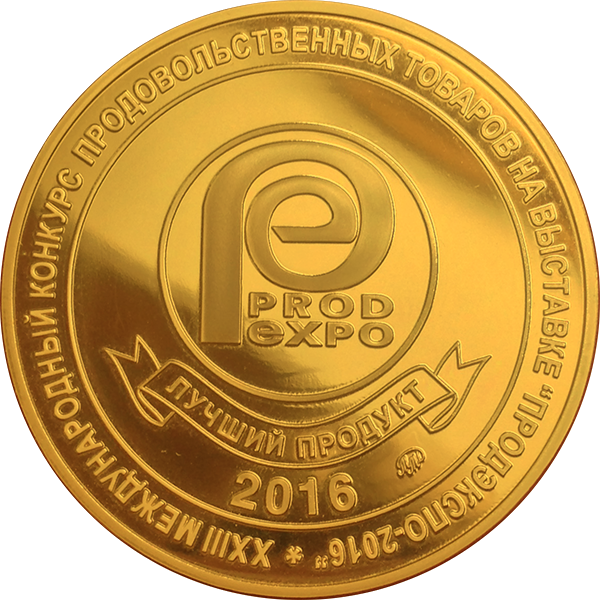 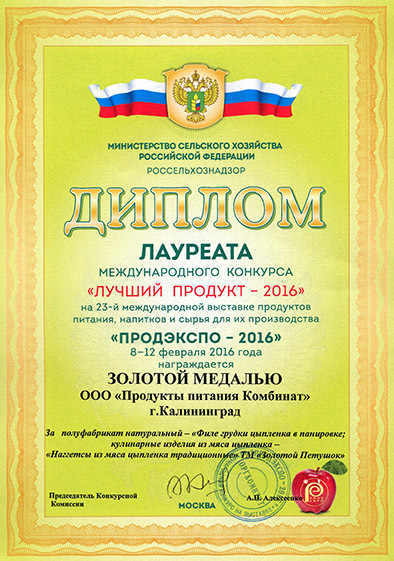 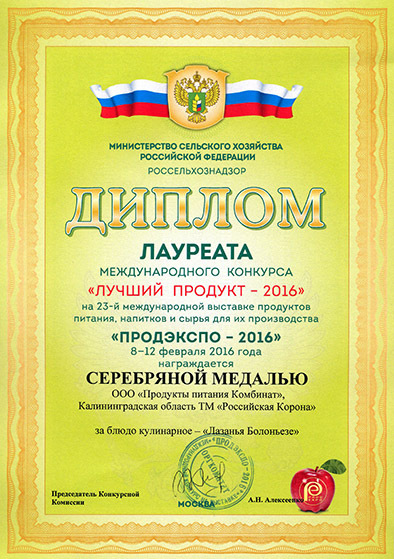 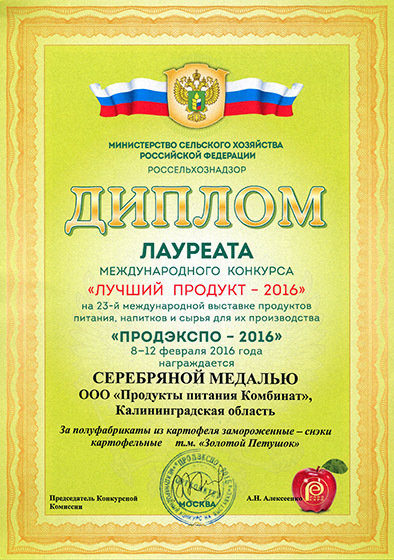 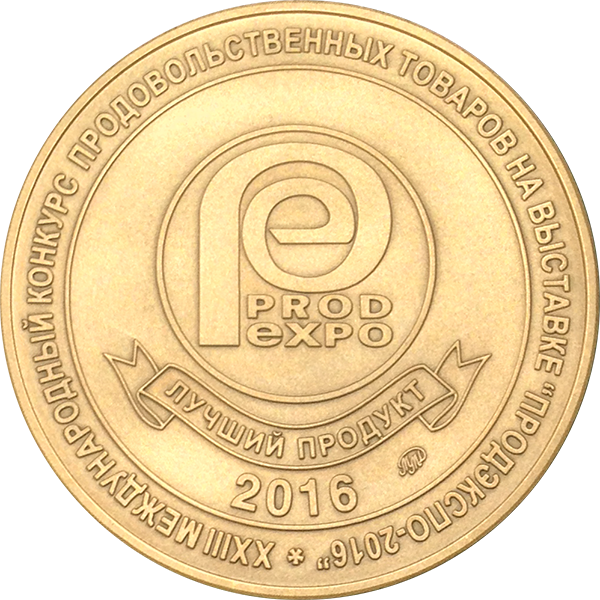 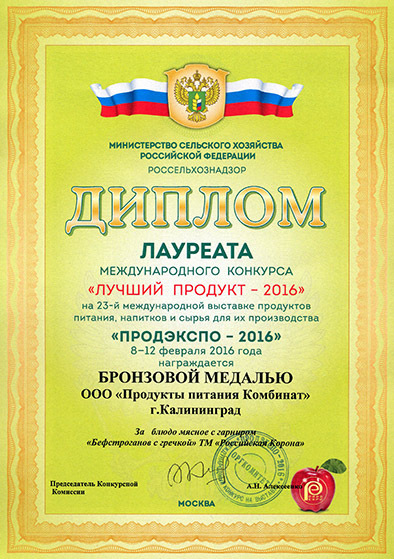 On the 10th of November, 2014 according to consumers’ voting results the trademark "Zolotoy Petushok” for the second time won the "No.1 Brand" award in the category frozen processed food (consumers’ survey "National trademark")!

On the 11th of October, 2014 according to the results of "Agrocomplex 2014" exhibition  ООО "Produkty Pitania Kombinat" was awarded a diploma "The best Kaliningrad product 2014 in the nomination "Natural product" -  “Chicken nuggets "Traditional”, "Chicken breast fillet", Nuggets "Vkusnyashki" by "Zolotoy Petushok".

At  the "Agrocomplex 2013” exhibit on October 11, 2013,  we received the following recognition:
"The best Kaliningrad product of 2013”  in the semi-finished product category for Rossiyskaya Korona trademark - "Zharkoe po-domashnemy"
"Cordon Bleu cheese / ham" and "Breaded Chicken breast fillet" were nominated for the most original recipe

Baltptitseprom:
"The best Kaliningrad product of 2013- in the meat products group"

According to December 2012 consumer voting results, Zolotoy Petushok is the “#1 Brand” in the category of Frozen Convenience Food!

"Produkty Pitania" exhibited at "Agrocomplex 2012" on October,20, 2012, and received awards for  "Great product assortment" and "The best Kaliningrad Product - 2012" from the products -  "Goulash with macaroni" and "Azu with mashed potatoes" (Rossiyskaya Korona trademark).

"Chicken breast fillet, pieces" by Zolotoy Petushok won gold and "The best in show" product at the taste showcase "KAZ-Food-2011​" in Kazakhstan on October 21, 2011.

The wonderful taste of the “Chicken-in-Bread-Crumbs Cordon Bleu” won the golden medal and the “Best Product’ 2005” diploma at “PRODEXPO’2005”.

The silver medal and the “Best Product’2005” diploma were awarded to the “Filled Cheese Straws in Bread Crumbs” for their high quality.

The golden medal of the “Zolotaya Osen’2004” exhibition for the choice quality of the “Tenderloin Balls with Cheese/Ham Filling” and of the “Chicken Tenderloin Pieces in Bread Crumbs”.

The Company’s name entered in the “Green List” of the Russian Office of the Greenpeace signifying that the Company’s products are entirely non-GM.

The diploma of the Moscow Consumer Protection Society “For Contribution in Formation of Civilized Consumer Market in Russia”.